[Updated January 19, 2014 with improved description of the role of the Cal Poly wine program.]

The Saturday Grand Tasting was held at Windfall Farms, a venue that appeared to be at least a quasi-working farm.  The specific location was one of the several horse barns, albeit pretty luxurious digs for horses.  Tile walls, clean coated concrete floors, and not a hint of horse-y aroma.  With three wineries per stall there was plenty of room.  Kudos to the organizers for limiting ticket sales to a reasonable number of people.  Continue to read our review of the Paso Robles Garagiste Festival Part II: Saturday with pinot noir. 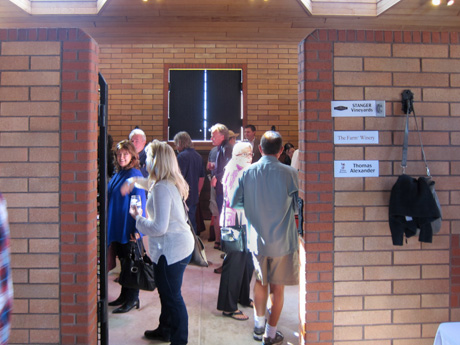 A Stall at the Venue

There were 49 wineries at the grand tasting.  By our count, a full dozen were pouring at least one pinot noir.  Our strategy was to make two circuits around the barn.  Naturally, the first turn was for pinot noir.  On the second iteration we were looking for GSM blends but were amenable to other suggestions.’

Our general impression was very positive.  There are some tiny wineries making outstanding pinot noirs.  Standouts included Cutruzzola Vineyards and Baker & Brain.  (The latter also gets first prize for most unusual name.)

It occurred to us that some of you may want a copy of the Garagiste Festival official program.  I’ve scanned the pages and put them into a pdf file.  You can get your copy by clicking here (4.7 mb file).

The table for Cutruzzola Vineyards was staffed by co-owners Lisa Miller and Frank Cutruzzola.  These folks, along with winemaker Stephen Dooley, produce all of 500 cases a year.  Started in 2007, Francis and Lisa are living proof that it’s not the size of the production if the quality is high enough. 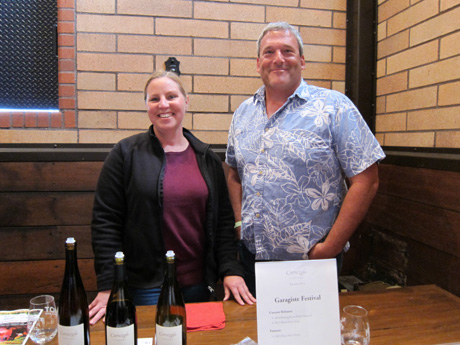 Cutruzzola was tasting a mini-vertical of their Gloria pinot noir (both $40).  The 2011 is ready to drink right now.  Featuring aromas of spice and cherries, the palate continues with more of the same.  A long, complex finish ends the tour.  The 2012 needs a little more time, with oak and tannins not yet fully integrated into the wine’s structure.  But you’ll have to wait for it anyway because they’re not planning to release it until spring, 2014. 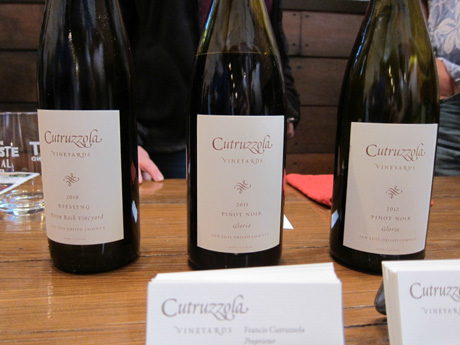 Neither wine is currently on the Cutruzzola website.  They do offer a 2009 for $34.  If we take a chance and order a few bottles (not much of a risk), we’ll report the results here.

[pullquote]But no, it’s actually the, um, brainchild of Josh Baker and Matt Brain. Both are full-fledged wine professionals: Baker is full-time winemaker for Phase 2 custom crush; Brain is a professor of viticulture and enology at Cal Poly. “We went around and around about picking a name; we wanted something that spoke to being artisan and handcrafted, with an eye on the science,” Baker said.[/pullquote]

Baker and Brain is the brainchild (sorry) of co-owners and winemakers Josh Baker and Matt Brain.  Founded in 2009, the pair have ramped up production to 1,200 cases.  The winery was one of those featured in the Garagiste preview article in Wines & Vines, from which this paragraph is extracted → 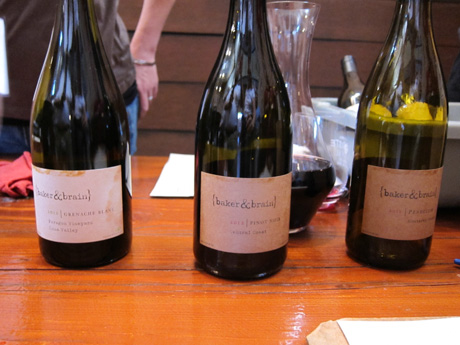 Regardless of background, name, or anything else their 2011 Central Coast pinot noir ($30) is easily the bargain of the show.  We can’t say it any better than their tasting notes:

In the nose, the wine showcases hints of black cherry compote as well as floral notes of dried rose petal and violets. As the wine opens, nuances of earth, leather, sandalwood and cedar evolve. In the mouth, this Pinot Noir shows depth and balance. The silky, almost rubanesque texture, fills the mouth and lends to a finish that is lengthy and compelling.

OK, “rubanesque” is a little over the top, but these guys are allowed some hype.

Look, we only review really good wines.  We thought Cutruzzola and Baker & Brain were the two best pinots at the Garagiste Festival.  But there were plenty of other contenders.  Our first runner-up is Aaron Wines. Owner and winemaker Aaron Jackson specializes in petite sirah.  In fact, that’s the only wine listed on their website. Luckily for us, Aaron tried his hand at pinot noir under a second label.  His 2012 Aequorea  “Seafarer” San Luis Obispo County ($34) is a terrific example of central coast pinot noirs, with deep intensity and flavors of earth and dark fruit.  At the price, it’s a bargain. 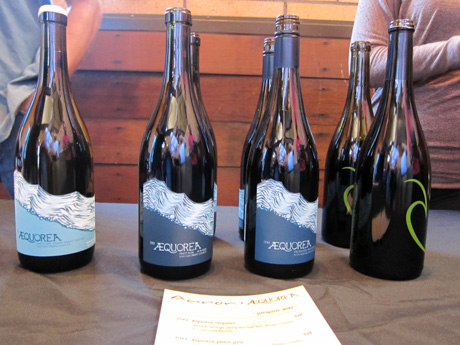 If the Aequorea “Seafarer” is not available on the website, how can you buy some?  I posed that question to Aaron via e-mail.  He let me know that the entire website is being rebuilt so he hasn’t bothered to list the Aequorea yet.  Projected date for finishing the rebuild: mid-January.  In the meantime, you can order this pinot via e-mail to aaron@aaronwines.com.  If you order this wine, mention CaliforniaWineFan.  No, you won’t get a discount but you’ll contribute in a small way to our success. 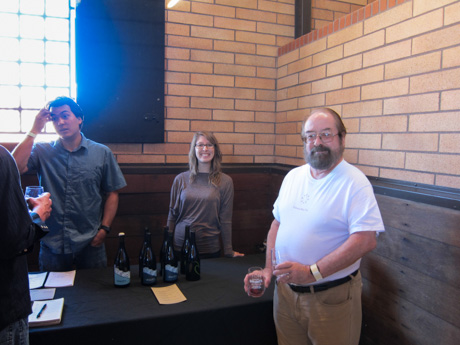 Samsara Wine produces 1,100 cases per year.  They are located near the infamous Lompoc Wine ghetto (although owner Chad Melville claims his operation is outside the boundaries of the ghetto). We tried their 2012 Santa Rita Hills ($36, 350 cases produced).  In a somewhat unusual move, 25% of the grapes were whole-cluster fermented, lending a note of grape stems to the wine.  The website description pretty much matches our notes:

Deep, powerfully scented aromas of red/blue fruits, dried wild sage, kirsch fruit intermixed with notions of lavender, earth and spice, and a green peppercorn. The aromas give way to the dense flavor of dark cherries, black currants and dried herbs. This wine displays an abundant texture from the stems, thicker skins, and native yeast fermentation. It needs 1-2 years more of bottle age and then should last for 10-15+ years.

This is one to buy and hold. 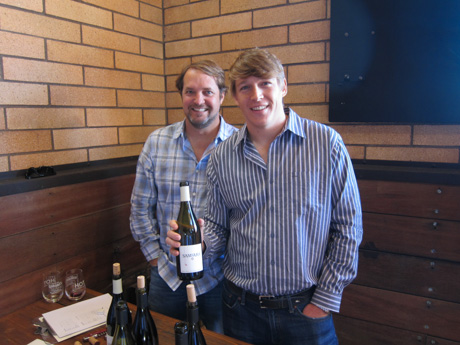 Part of the proceeds from the Garagiste Festival go to support the Cal Poly (San Luis Obispo) Wine and Viticulture program.  They had a table in the hallway where we tried their pinot noir.  Quite competently made.  The future of California winemaking is in good hands with these folks. 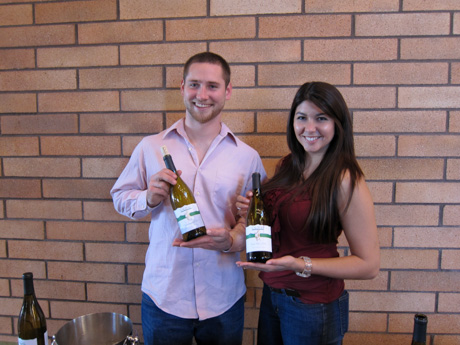 The Missing Leg is a project of Karl and Heidi Wicka.  Each has impeccable winemaking credentials.  Founded in 2007. The Missing Leg produces 350 cases per year total.  We were fortunate to be able to taste two of their 2011 pinot noirs (each $30). 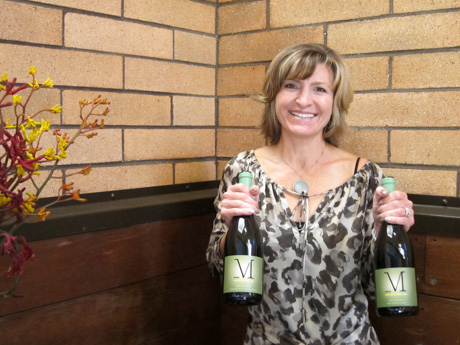 The Righetti Vineyard is part of the Edna Valley appellation.  We are not generally fond of Edna Valley pinots, but this one is about as good as it gets. Unusual blueberry aromatics are followed by a heavy, dark fruit palate. If your tastes in pinot run in the direction of zinfandels, this is for you. 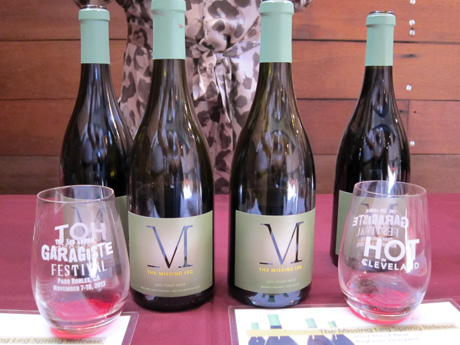 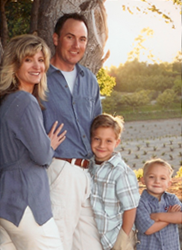 The Missing Leg’s family: Karl, Heidi, and their kids

But the William Caine Vineyard was an eye-opener.  These grapes are grown in the Templeton wind gap and therefore get cool ocean breezes.  In 2011 this vineyard was hit by a late frost and unusually cool growing conditions.  The result is a smoky wine with tobacco overtones.  This wine was a little too acid for our taste, but, again, if your tastes run in that direction head to the website and order a few bottles.

You must wonder where the name “Missing Leg” originated.  Karl and Heidi were searching for a name.  Here’s what their website says:

The name had to be intellectually evocative.

The label had to be visually recognizable.

Its purpose was to honor the memory of his father Ronald Wicka.

While rummaging through a collection of inherited British pub memorabilia, Karl and Heidi stumbled upon a brass casting that depicted an arrangement of 3 horseshoes. The “horse brass” was emblematic of Karl’s father’s favorite pub outside of London, known as The Missing Leg.

The Wickas presented the brass piece to the design firm 300FeetOut with the idea of creating a wine label based on the 3 horseshoe arrangement. The designs that incorporated the original “Missing Leg” emblem were deemed “too rustic” for the sleek new world Pinots and Syrahs that would be the cornerstones of the brand, and a concept of the letter “M” with one of the vertical “legs” missing was selected. A new version of an old brand was born.

You can decide for yourself whether or not it worked:

Next up: the GSM and other wines.  Stay tuned for Part III.

[1] By now it’s clear to us that 2011 was a tricky year for pinot noir in many regions.  We look at this as a test of winemaking capabilities. The folks who actually make the wine undoubtedly have a different opinion, most likely using language not appropriate to a family-oriented blog.  Fear not — based on our preliminary look at the 2012s, winemakers will have a much easier time coping with that vintage.